I’ve been following the case against Arne Svenson with a lot of interest and I am glad that it has been resolved in his favour.  Some of these photographs are quite beautiful when taken as images of calm domesticity but his method opens up a can of worms that says more about affluence and the assumed rights it appears to bring than it does about the ethics of the photographer. The issue with Svenson’s photographs is they are of the insides of people’s homes and he took them using a long lens from outside their homes and did not ask permission.  Initially I found the images exploitative and creepy, but on reflection I do not.

My reasons for being pleased he won are about the complaint itself which I feel was wrong. Although I wouldn’t call myself a photographer, most people think I am and as a person who photographs I am of the view that if I can see it, then I can photograph it.  Svenson appears to be of the same opinion.  Clearly Svenson was not using a magical sci-fi camera that can see through walls.  If he had invented such a machine, I would guess he’d have a far more lucrative time in the defence industry.  But he calls himself an artist and exhibits as such.  I get that.

The more I think about it, the more I realise that there is no real difference between me and him as I also exhibit my photographs and some of them are of people who have no idea that they are on display.  I make no apology for this.  The fork in the road is how far I am prepared to go to get an image.   I have photographed many people in public spaces.  I’m relatively benign, I don’t troll or shame with my images, but I am sure there are some of my subjects who would not be best pleased with the results of me pointing and shooting at them.  My justification is that if someone objects to being the subject, then I will not take the shot.

Some people having a nice time outside a pub.

The catch is, I take a lot of care not to be observed observing and with over 30 years of experience hiding in plain sight, you’d need to be on your toes to catch me watching you.  The fact that I am watching you in the first place most likely means you are so absorbed in something else that I’m just not an issue.  That is, in fact, the very thing that makes you interesting.  You observing me breaks the spell.  Well not always: 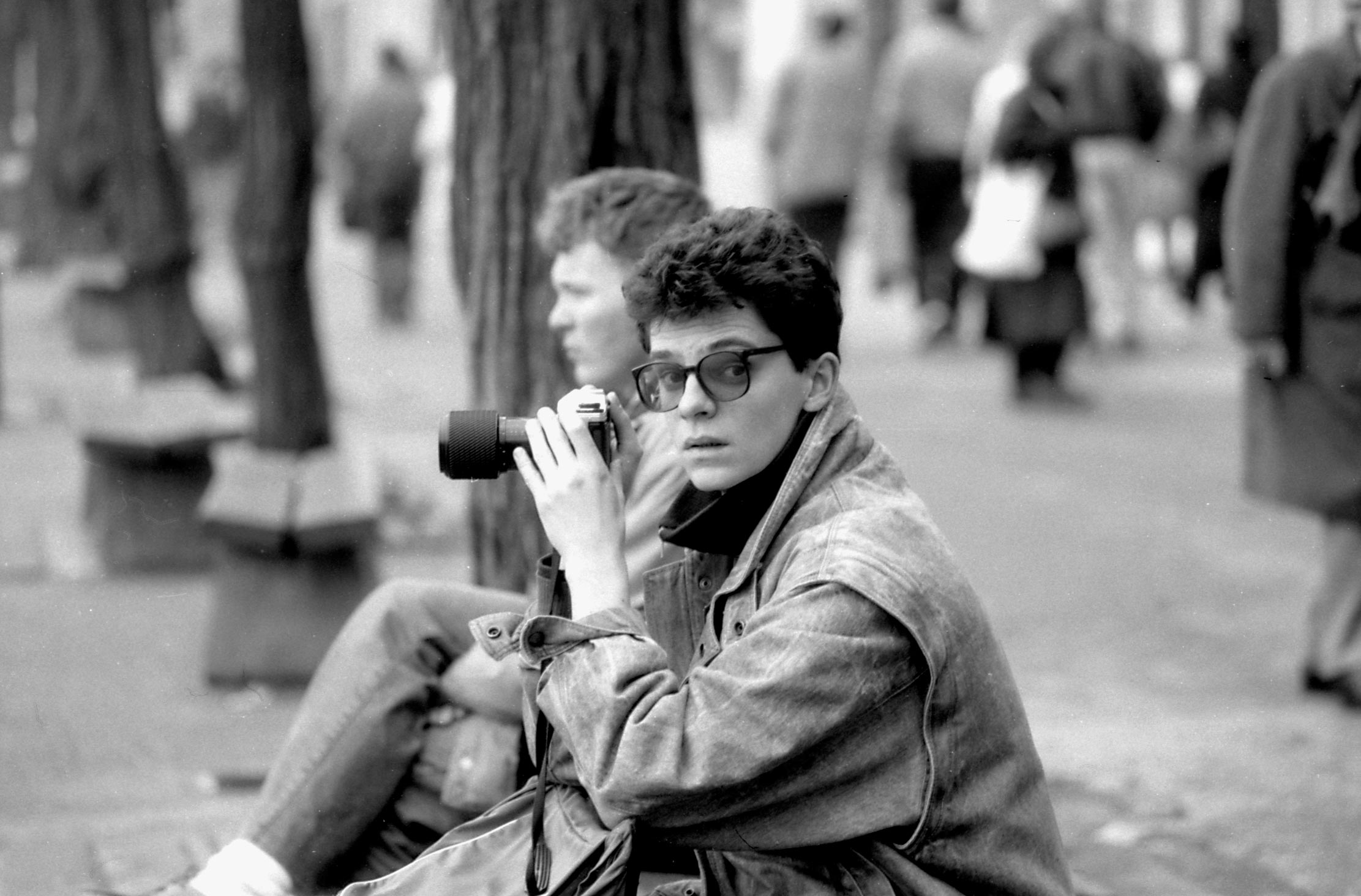 The thing that really gets my goat is the complaint about privacy as those people were doing the stuff they were doing in front of windows that made no attempt to conceal what was going on inside the room.  Svenson could see them from his own home.  Granted he took a closer look with a long lens which is questionable but not illegal and people are prepared to leave an awful lot on show anyway.

I lived in Krakow for a few years in the early 1990s.  From there I moved to Hamburg and one of the first things I noticed was the fact that people did not cover up their windows anywhere as near as much as they had in Poland.  One journey I frequently took was on the Schnellbhan along Isestrasse in Eppendorf which is one of the most affluent parts of Hamburg.  This line went along a street at height and from any carriage you could see directly into people’s homes.  I was mystified why they didn’t have curtains on their windows as I could clearly see into their beautiful apartments.  I didn’t avert my eyes when I went past.  If anything I was fascinated by the little glimpses of the lives going on oblivious to the thousands of people passing by.  It was in stark contrast to the net curtains on Polish windows.  It said a lot about how people dealt with privacy, about how secure they felt they were and perhaps about the way those inside felt about those on the outside.

From the kitchen window of my flat in Altona, I frequently caught an unintended eyeful of a neighbor who had some interesting proclivities that were eventually concealed, much to my relief, by the marijuana plants growing on his window ledge.  He either didn’t think anybody could see him or he thought it mattered little if they did.  Considering the little I was unable to avoid of what he was prepared to do, I’m guessing that he didn’t care in the slightest and possibly wanted us to look. I never met him so I got the chance to ask him and to be honest, I very much doubt I would have mentioned it had we ever come into close enough contact.

The complaint about Svenson included some business about the fact the photographer was profiting from this snooping.  This is the bit that infuriates me the most.  Svenson did the work, he owns the equipment, is represented by a gallery.  This is how he makes his living.  To expect a cut in any profit generated by his work is ridiculous and was deservedly thrown out.  It is also at odds with the claims to privacy.  Money is was it frequently seems to boil down to.  Privacy it is assumed, is a commodity and its price is dictated by the market.  But market is stupid and knows nothing about the urge to make art only what it can get out of selling the package on.  Privacy is a wildly abstract term that is so hard to reinforce.  I am most often challenged on the matter outside the buildings of corporations rather than near the homes of the wealthy.  And it is simple for me to run rings around those men in tabbards who parrot rubbish about the legality of my actions and are so completely ignorant of what I am doing that they demand to see the pictures I have taken on a roll of film there and then.  I feel sorry for them really as they have no chance of winning the debate and cannot afford to touch me or my camera for fear of being caught on the surveillance systems that bristle all around us.  This demand for privacy is frequently related to an assumption about why the image is being captured and a warped idea of the potential value or use of the final product

This guessing is another problem.  I had a spat with my middle brother a few years ago because he told me about an incident when he had seen a man photographing a merry go round that his 7 year old daughter was on.  My brother approached the man and intimidated him into deleting the photographs he’d taken.  My brother is over 6 foot and substantial.  If someone had done that to me,  they would have got short shrift and no cooperation whatsoever.  My brother did it to ‘protect’ his daughter.  It mattered nothing to him that he was in a public place, that the man statistically  was most likely to have been just indulging an innocent hobby, having a nice day out, like my brother and his family.

A singing child in a buggy, on the bus.

Svenson is tacking far closer to the wind than that particular happy snapper, but again, in the complaint the issue of children was brought up.  The inclusion of children in some images, it was implied, in some way made Svenson’s activities more sinister.  This really is arrant garbage.  It is incumbent on parents to protect their children, but most situations do not call for the destruction of someone else’s property.  By the same token people need to protect their own privacy and not expect other people to do it for them.

The question really has to rest with if the images were worth the effort and I think they most certainly are.  I would probably be taken aback if I was confronted by a photograph of me taken by Svenson in the manner of the ones that got contended.  But I would also appreciate the fact that the images themselves are rather lovely, almost like Vemeer.  In fact they remind me of Vemeer precisely because many of his paintings are so candid and the subjects appear to be unknowing or only very recently aware.  I do not think Svenson criticizes his subjects or even comments upon them, instead he shows serene domestic tableaux.  What he may have done as an unintended consequence is disrupt this feeling of security and destroyed the thing he set out to portray and that is a shame.  What is most evident in these images is a kind of domestic calm and comfort that most of us aspire to.  What actually goes on in those private spaces remains completely unknown because privacy is about a good deal more than what can be seen in a moment and this is why I feel that Svenson should not have lost his case.

Arne Svenson is represented by the Julie Saul Gallery, The Neighbors images can be seen here, as can more of his work.