In February this year I was invited to give workshops as part of the Dhaka Art Summit and for the British Council at The Bistaar Arts Complex. The plan was to be part of a team delivering four workshops during the summit, plus another workshop in Chittagong. I went with Eleanor Von Browne, Trish Scott and Fraser Muggeridge. It was great, not least to be with three other people I either didn’t know all that well, or had never met at all but whose company I thoroughly enjoyed, in a place I had only ever heard about but had no real concept of.

It’s pretty exciting to be invited to travel so far to deliver something you are passionate about, so I spent quite a bit of time working out what I wanted to do. I thought a bit around ideas of Anglo Bangladesh relations and how the countries histories are joined. There is no escaping the ruinous effects of the British empire but I also felt it would serve no purpose for me to show up and agit prop like a 21 year old recent graduate. I know I have a limited understanding of a complex and subtle landscape which heavily includes bits when the British mattered not one jot so why impose my ignorance. So I decided to try and work with what I know and let the participants bring the story to the party. What I did do, in what might be considered a small scale re-enactment of the iniquities of the British empire, I purchased a 10x 1m length of cotton, enough to make 2 saris on a cold sleety January Saturday in Dalston market from some nice Bangladeshi fellas. I took the fabric back to the studio where I soaked it in cyanotype chemistry, dried it, packed it in bin bags in order to lug it back to the part of the world it quite likely came from.

I wanted the workshop attendees to work collaboratively in order to produce a piece of work that everybody could see their contribution as a part of the whole. The idea was to spend some time thinking about how to create a piece of collaborative work that would use the environment and the knowledge of the attendees. So I practised in and around my studio, making large photograms of the things I found. I started with random pieces, just placed on the sheets in the bright cold sunshine and ended up wrapping the last piece of practice cloth around a tree. I liked the results.

I wonder what will happen if I…

Even in January there is UV in London

In terms of references and influence I chose Kara Walker and Helen Chadwick who both use the life size (or near to) human form to tell a story in their work through the use of tableaux in story telling.

I first came across Walker’s work while visiting NYC to attend the Black Portraitures conference in 2016. I had spent a fairly desultory afternoon schlepping about MoMA looking at the work of the mainly dead fellas that you get in places like that, until I found myself in in front of “Gone: An Historical Romance of a Civil War as it Occurred b’tween the Dusky Thighs of One Young Negress and Her Heart”. Which was a reward I felt I richly deserved. 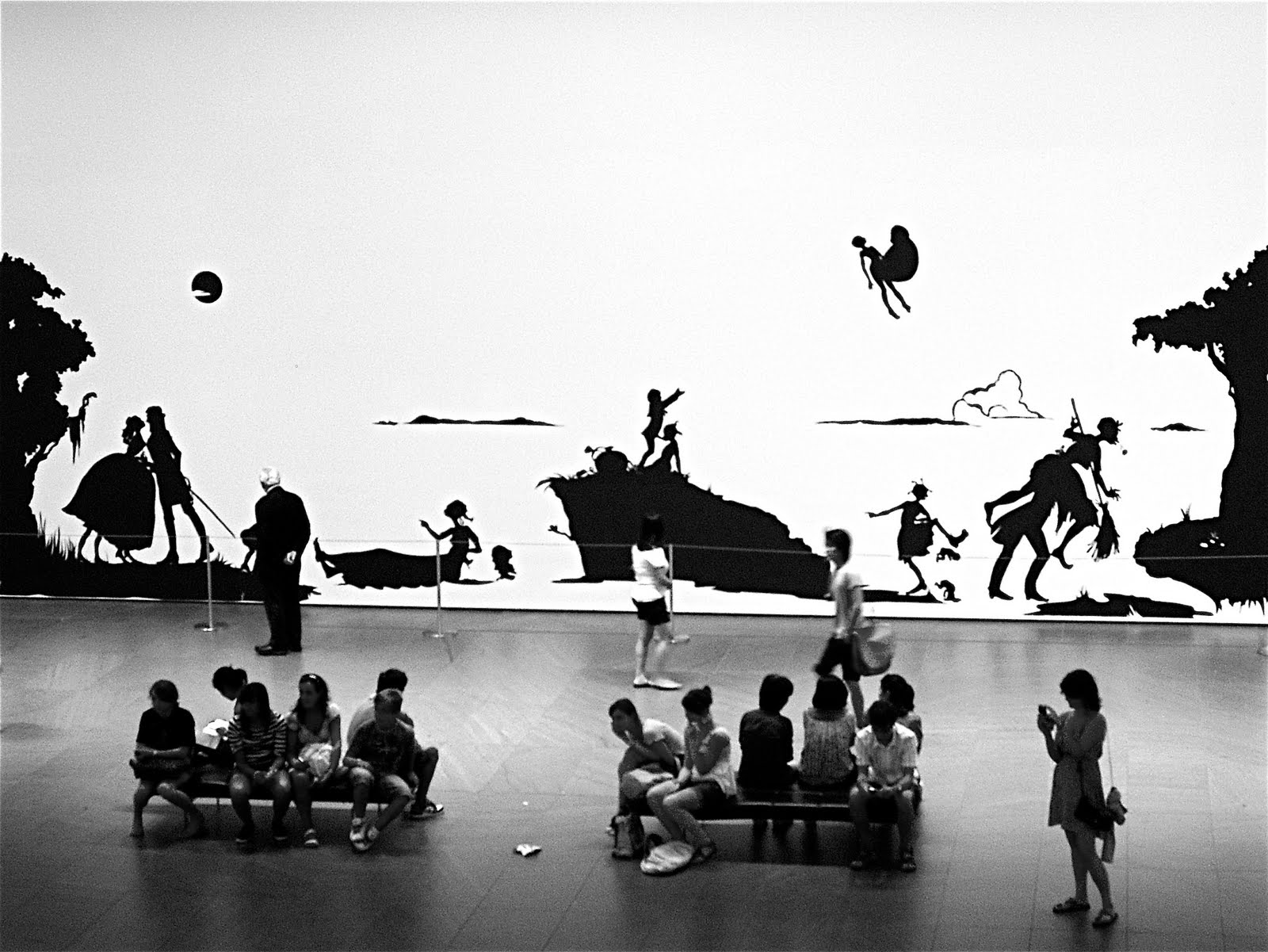 Gone: An Historical Romance of a Civil War as it Occurred b’tween the Dusky Thighs of One Young Negress and Her Heart. Kara Walker

Gone: An Historical Romance of a Civil War as it Occurred b’tween the Dusky Thighs of One Young Negress and Her Heart. Kara Walker

Chadwick and I go way back. I have no idea where I saw “Oval Court of Mutability” but the effect of first encountering it was so profound I was able to find it with an internet search without knowing the author some years later. It was only after that success that I learned about what an extraordinary human being she was too. Her narratives are more fractured but no less intense. Anyway, I havent seen that piece in over 20 years not least because it is currently, woefully, in storage at the V&A. Anyway, this also chimed because of its use of blue photocopies as they look like cyanotypes.

The final influence is Hogarth. It usually is. I’ve been bothering Sir John Soane’s house museum for over 30 years and I never tire of listening to the guides taking an audience through The Election or The Rake’s Progress. It’s the universality of the experiences in the pieces that always snares the crowd watching as the guide reveals the paintings. Corrupt politicians? Selfish irresponsible privileged people? The violent drunken hoi polli? Plus an army of indifferent humans rubbing along, doing stuff on the sidelines like the rest of us. I don’t think you can beat Hogarth.

William Hogarth An Election Entertainment from The Humours of an Election series, 1755

However, these are considered pieces built over a long period of time. I had two three hour workshops.

We started with everybody making a quick print from something they had on their person, a pen, some jewelery, anything, just to have the opportunity to see how the chemicals and light work together. Then there was a discussion about bangladesh and those things they thought of as most bangladeshi. The participants needed to agree amongst themselves how they could express those things collectively. We rehearsed and then it was up to the roof to make the image happen.

A discussion about what to place on the sheet

Exposing the fabric on the roof, the light was very low, but there was still a large amount of UV

The final print, the colour developed and deepened later.

The second workshop in the Bistaar Arts Complex was a very different experience because of the nature of the venue.  The summit was a high end showcase for some artists with an international profile.  There was a large amount of cyanotype on the walls of the gallery, the process was in some respects familiar.  Bistaar is a much smaller more traditional place.  There were no talks about cultural theory or political spats between different factions of the art world, not that this was a criticism, but I guess i was a bit more at home in this environment because I make stuff and then think about explaining it and the art summit seemed more to me about having an idea an using art to realise it.

The light was also weak there because where Bangladesh is and my ignorance.  Nevertheless, the class was fun.  Much bigger, with one or two people more robustly critical of about my cultural gaps, but with some reassurance and discussion, we managed to produce an even bigger print with slightly stronger sunlight.

People surprised me by making paper templates that illustrated themes in the Bangladesh landscape.

I liked the way people engaged with the process in different manners.

The final piece after 15 minutes of late afternoon sunlight.